On the 17 June 2015, I did my EASA PPL (A) Skills test. After weather cancelled an attempt on the 14 June with cloud base at surface level, calm winds and less than 3km visibility, I was anxious about taking holiday off work for the middle of the week given the forecast looked favourable. When it actually came to the morning, the weather was immaculate up until midday and then deteriorated to on limits: clouds at 3200ft, 10km visibility and winds variable between 220-280 10-20kts (2000ft wind 260/25kts). I was being tested in a Cessna 152 and the crosswind limit is 12kts and to do the manoeuvres we needed at least 3000ft to recover, so fairly hairy on whether I was going to go. However, I made the command decision to go after consulting with the radio operator.

My tested nav. route was the below: 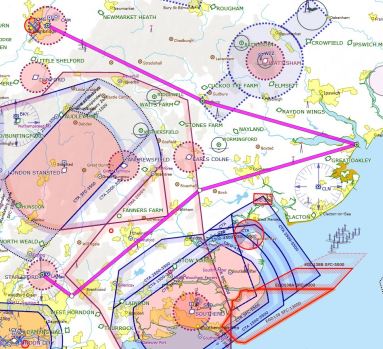 After a smooth exit from stapleford and smooth navigation trip down to Harrich on the east coast just below to Felixstowe, I carried onto Sudbury, where I was asked to divert to O/H Clacton from just North of a small town called Manningtree. I chose my known spot which was just east of a small hamlet called Capel Saint Mary: 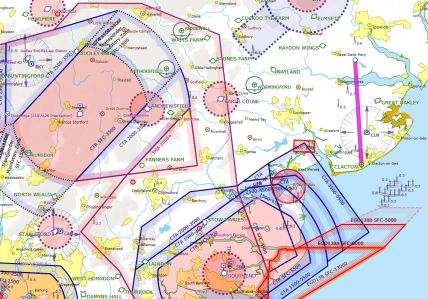 You’d think I diverted from a bizarre known position but I picked out a small hamlet from the map based upon a small little body of water that was clear on the ground, circled it and did my divert procedures to Clacton. I got to the Northern tip of Clacton on Sea in the gap south of Frinton on Sea and realised I was off track and I had wind corrected in the wrong direction so told my examiner and said Clacton is south of the town. Therefore, I’ll follow the coast. My timing was 30 seconds off but the examiner was happy with the attempt.

Following the diversion, we went into appreciation of differing attitudes at varying speeds, medium turns and steep turns at 2500ft and a practice forced landing (PFL). The setup of the PFL went well, until during my checks I lost my field, picked it back up and a prompt from the examiner hinted I should be turning onto base rather than downwind, which clicked after doing my practice MAYDAY call. Nevertheless, I made it into the field and then carried out an EFATO (Engine Failure After Take Off) after a go round at about 500ft. We then climbed back up to about 3000ft carried out 3 successful stalls: Full clean stall recovery at wing/nose drop, base configuration (1300RPM, 20 AOB, high nose attitude and recovery at the stall warner) and final configuration (1300RPM, 3 stages of flap and recovery at the stall warner).

To descend back down the examiner put the aircraft into a spiral dive which I recovered from and we then began some instrument work with the foggles. My instrument work is usually on point and it was the least of my concerns. However, on test it was considerably more draining and I had problems keeping 2000ft due to adding to much control force, which got better and the 180 degree turns where fairly spot on. After the foggles came off we went into Radio Navigation work and I tracked the Lambourne VOR back west, where I positioned fixed off the Detling VOR which positioned me north of Witham and west of Kelvedon. From here I tracked the LAM VOR back to Stapleford and joined overhead for runway 22L.

On joining, the wind was declared out limits gusting 20kts at 270 by the radio operator on overhead. I continued to join for runway 22 where the wind had eased to 10kts on my normal circuit on final. The first landing was a cracking crosswind landing, it’s a shame that the remainder of the circuits didn’t go so smoothly. I continued onto a flapless which went well, and a decent landing. On the glide circuit I had to go round due to an early reconfiguration of the aircraft and attempt it a second time, of which went well, minus a slightly late flare. At this point, the wind had picked up and became out of limits on runway 22L. However, was in limits on runway 28L. The 28L circuit is a rarely used grass runway and I had never done a circuit on it before, which after two hours and twenty minutes, my capacity was sapped and wasn’t looking forward to learning it.

I joined late downwind after taking off from 22L and entered a bad weather circuit which I landed too hard and with a bit of correction from the examiner, brought the aircraft to a steady ground roll and did a go around. At this point, I thought, no chance of a pass. On the second attempt, the landing was better, but still a carrier landing; off which I did a performance stop and vacated onto the taxiway. Brought the aircraft to a stop and did the after landing checks. I asked the examiner “Have I partialed?” thinking the last circuits where not up to scratch, he said with a grin, “no, no you’ve passed. You picked a hell of a day to do your test”.

My test was an exceptional learning experience, and I have highlighted a number of the things I have reflected upon which will hopefully make me a better pilot going forward.

I am a commercial flight instructor who qualified in December 2018 with a prior career in information security. I started my commercial flight training in November 2017 but have been documenting my flying since I got my PPL in 2015. I journalise and video blog many of my flights, outdoor pursuits and hope that this blog serves as an informative platform for those about to embark, currently learning to fly or are in commercial training. Please get in touch by commenting or directly via the contact page. View all posts by Jonathan Nicholas